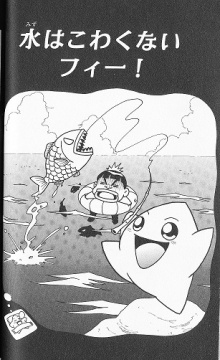 Not Afraid of Water Fii! (Japanese: 水はこわくないフィー!, Mizu wa Kowakunai Fī!) is the third chapter of the first volume of the Densetsu no Starfy manga illustrated by Yumiko Sudō. It follows on from the events of chapter 2.

The chapter begins with Takeo having a dream. Starfy is playing in a pool and he asks Takeo to swim with him, so Takeo holds Starfy's hand and Starfy swims underwater with Takeo, but Takeo finds it painful. Takeo exclaims he cannot swim, then Takeo wakes up. He wonders whether it really was a dream and says he was scared. He is then shocked to see Starfy wetting the bed.

Later, Takeo and Starfy are outside hanging out the bedclothes to dry on a rail. Old Man Lobber says that yesterday Starfy was busy repairing something and Takeo wonders if it is his Game Boy Advance. Starfy then sticks a piece of paper on to the bedclothes that says "Takeo's Bed-Wetting" (Japanese: タケオのおねしょ). Takeo is then embarrassed to see Rumi-chan.

Rumi-chan shows Starfy, Old Man Lobber and Takeo four tickets to the pool and invites everyone to play together in the pool. Takeo is worried because he cannot swim but Rumi-chan says that Starfy will be a good coach and Takeo goes anyway, with Old Man Lobber on his head.

At the pool, Rumi-chan starts swimming with Starfy on her head. Takeo jumps in, trying to swim too, but he falls underwater with Old Man Lobber and has to expel water from his mouth when he rises to the top again. Meanwhile, Rumi-chan gets out her purse and goes to buy some juice.

Konk appears seemingly out of nowhere so Starfy attacks him with his Star Spin and he lands on Takeo's swimming trunks, hurting him. Konk uses his shell like a drill to push Takeo back in the pool and continues to drill into him, making Starfy cry and for some reason, Konk starts to cry as well. Old Man Lobber talks to Konk and makes him feel better but Konk makes a portal that leads back into Starfy's world and Starfy, Old Man Lobber, Konk, as well as Takeo fall through it. Rumi-chan comes back with the juice but is surprised to find that the others aren't there.

Takeo runs towards the portal trying to go home but it starts to close and Takeo cannot make it in time. Konk says that Takeo cannot go back to the Human World unless he is defeated, so Takeo hopes that Starfy will beat him. Meanwhile however, Starfy is relaxing on a bench with sunglasses on drinking coconut juice. Konk tries to attack Starfy so Starfy jumps up but Konk goes for Takeo instead, injuring him.

Starfy is angry and goes and attacks Konk with his Star Spin. Takeo thought Starfy was doing this for him but he comments that ruining his coconut juice is unforgivable, disappointing Takeo. Takeo notices that a portal is opening up again so Takeo says he is going back to the Human World. Takeo wonders whether they won't be able to meet each other again since they will be in different worlds. Starfy regrets it, but he pushes Takeo back into the portal that leads to the Human World. This fails however, as Takeo falls back out with Konk stuck on his bottom, tickling Takeo. Starfy tries again and manages to push him back into the Human World with Konk stuck on him.

As Takeo arrives back in the Human World, Konk falls off him and falls into the jar. Takeo wonders if he cannot see Starfy anymore. Takeo notices that Starfy has left a letter, apologizing for having broken his Game Boy Advance in chapter one. He has left Takeo his Game Boy Advance fixed for him and remembers that Old Man Lobber said Starfy was busy with repairing something. Takeo starts to cry because he is lonely. Suddenly, the portal starts to open again and Boctopus falls through it, breaking his Game Boy Advance again!