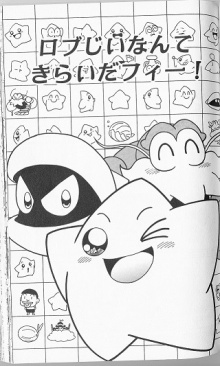 I Hate Old Man Lobber Fii! (Japanese: ロブじいなんてきらいだフィー!, Robu-jiinan te Kiraida Fī!) is the fourth chapter of the first volume of the Densetsu no Starfy manga illustrated by Yumiko Sudō. It takes place some time after chapter 3.

The chapter begins somewhere in Pufftop Palace (although on the first cell Starfy can be seen next to the sea). The jar has been dropped, so Starfy falls off Pufftop to get it, with Old Man Lobber hanging on to him. The jar smashes and Ogura comes out, with various enemies like Konk, Boerun, Boctopus, Mandogora and sharks (possibly Snarks) surrounding the jar.

Old Man Lobber prepares some food and Starfy looks forward to it, but he is angry to see that Old Man Lobber gave him a coconut. The coconut says "Prince do your best - From Old Man Lobber" on it but Starfy is not impressed and tips the table up. Old Man Lobber calls him irresponsible. Starfy does an "angry spin" but Old Man Lobber tells him not to spin so much and Starfy ends up in the water dizzy and too tired out to swim properly.

Old Man Lobber jumps in to the sea to rescue Starfy, holding the coconut. He asks Starfy to hold on to the coconut too, so he does but suddenly The Whale appears and inhales both Starfy and Old Man Lobber. Starfy lies down with his eyes closed and wakes up to find that he is inside the stomach of The Whale. He figures that Old Man Lobber also should have been swallowed and asks where he is, but there is no response.

Starfy plays around thinking he is the only person in the area. He finds something trapped in The Whale's insides, picks it up and he ends up picking up Moe, who wonders what's going on. Starfy asks if he is Old Man Lobber and Moe tells Starfy his name and calls himself "super beautiful" and "wise". Moe asks if Starfy is a stranger but Starfy stretches out Moe thinking that Old Man Lobber is hiding inside his clam. This annoys Moe who calls Starfy stupid. Starfy then wonders if Old Man Lobber really isn't there. Moe tells Starfy that he did see an old man like a lobster and thought cells reveal that Old Man Lobber was confronted by Bankirosu. Old Man Lobber told Bankirosu not to eat him/the coconut (it is unclear what) but Bankirosu sunk its teeth into the coconut.

Bankirosu spots Starfy and comes after him, presumably wanting the coconut. Bankirosu taunts Starfy. Starfy looks at the coconut and remembers that Old Man Lobber told him to try his best and tries to attack Bankirosu but he lands in some spikes. Starfy says the wall of spikes is 'soft' and asks Bankirosu to try and come if he thinks it's a lie, so Bankirosu jumps towards Starfy and Starfy dodges him, causing him to fall head-first into the spikes. It is revealed that Starfy had stood on top of the coconut to prevent himself from being hurt by the spikes.

Starfy jumps out, still crying for Old Man Lobber. Moe finds Starfy and they reach The Whale's spout. The Whale propels them upwards and they reach the sea. Starfy rides on Moe's clam while he swims away. Later, Old Man Lobber is propelled upwards too, safe and well. He wonders where Starfy is but seems to enjoy being spouted out.