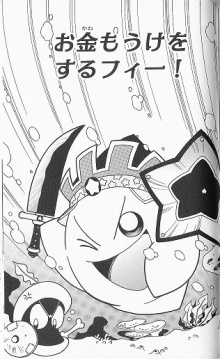 The chapter begins somewhere under the sea with Moe swimming around. Moe comments that he doesn't have any money. Moe has his eye on a turtle's shell but it hits him. Moe picks it up and uses it as a shield. Moe finds Starfy, who he thinks is a bunch of bananas at first but it turns out that Starfy was sleeping with his forehead down.

Moe shouts at Starfy and wakes him up. Starfy tells Moe he had a really interesting dream that Moe was a hero guarding the weak with a sword and shield. Starfy starts laughing and Moe gets angry and tries to go after Starfy but a rock falls down on his head and stops him. Although the rock made him dizzy, Moe is unharmed.

Starfy is surprised by this and thinks that Moe was heroic. Starfy kindly rubs his back. Moe mentions that he has to take care of his younger siblings at home and Starfy asks how many rooms his house has and Moe starts counting. He then says there are a countless number of rooms.

Starfy asks if he can go play at Moe's House, and Moe replies "of course" but says that he is busy for the day and he starts putting stones into the shell, apparently trying to sell them, eventually filling it with the stones piling high. Moe thanks Starfy for something and sends him flying away but he swims back to watch him from behind a rock. Moe watches as many fish come near the stones.

Starfy says something and it makes the fish go away and a lot of the stones get thrown away. Moe is angry with Starfy and he swims away. Later that night, Starfy finds Moe's House and decides to look in it. Moe finds his mother ill in bed. Moe asks her if she is okay and she asks for some medicine but Moe sadly does not have any money for any medicine. He is angry because he could have earned some money earlier but Starfy ruined his chances. Moe's Mother apologizes for being ill.

Moe says everything is wrong because of his father. In a flashback, it Moe's father is shown being abusive and Moe intervenes, telling him to stop it but he ends up jumping on Moe. Moe was then entrusted with protecting the family after his mother became ill.

Meanwhile, Starfy is hiding with his back faced against a box. Moe's green brother says that he is hungry and Moe says he wish he could help. Moe searches the box and finds Starfy hiding. Moe is really angry at Starfy. He pretends to be a banana but Moe is not fooled and forces him outside of his house. Moe goes looking for Starfy and finds him trying to attract some fish again with stones. Moe gets angry for some reason and Starfy tries to pretend to be a banana again but he is not fooled. Moe tells Starfy that he is selling fake stones. Starfy starts to cry and says he only wanted to help Moe afford some medicine. Moe walks away and starts to cry a little himself, thanking Starfy.

Moe throws away the 'bad stones' and Starfy wonders what to do. He decides to show the fish a trick. Moe wonders what Starfy is going to do because he isn't selling anything. Starfy pretends to be a banana yet again, humoring Moe and the fish.