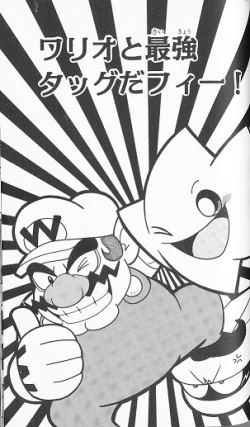 With Wario, this is the Best Tag Team Fii! (Japanese: ワリオと最強タッグだフィー!, Wario to Saikyou Tagguda Fī) is the eighth chapter of the second volume of the Densetsu no Starfy manga illustrated by Yumiko Sudō.

Starfy and Moe are seen walking through a town on a busy day. The town is similar to Okonomiyaki Town from the eighth and final chapter of volume 1 — False Starfy Appearance Fii!, in the way that Chuta and many Taruika with poles (possibly the police) are seen there. Moe looks at the window of a restaurant and decides he wants to eat. Starfy tells Moe he's out of money while showing him his empty wallet. Moe gets an idea on how they can eat without paying. Moe tells Starfy they can go in and eat as much as they want. Once they're finished, they run away. Starfy is shocked by this idea and already feels like the restaurant owner is yelling, but Moe informs him that he did yell.

The restaurant owner is yelling at a man. The man introduces himself as Wario. Wario brings a map out of his pocket and claims that it's a treasure map. The wind blows the map out of Wario's hand. Wario chases the map, but he is stopped when the restaurant owner hits him with a pan. Wario gets mad and uses a spin attack he calls the Wario Attack. A group of angry Taruika show up and start beating Wario up. Moe takes Starfy away from the crowd and shows him that he found Wario's map. Starfy tells Moe they should give the map back to him, but Wario is already gone.

Starfy and Moe decide to look for the treasure. The map leads them to a cave. They look around for awhile, but don't seem to find anything. Starfy and Moe start to think about the restaurant food. They are so hungry that they fall on the ground, but Starfy lands on a hidden button that activates a trap door. Moe happened to be laying on the trap door so he fell through it. A giant boulder suddenly falls down and lands right next to Starfy. Starfy hears screaming coming from the boulder. Starfy panics and worries that the boulder crushed Moe to death. Starfy uses his Star Spin to try to break the boulder, but it doesn't work. He tries again several times.

Meanwhile, Wario's on his way to the same cave Starfy and Moe are in despite losing his map. He enters the cave and starts to hear a voice. He wonders who it could be and soon realizes it's Starfy. Starfy is still attempting to break the boulder, but he becomes too hurt to continue. Wario tells Starfy he should leave, but Starfy tells him he's got to save Moe. Wario thinks for a minute. He then picks Starfy up and jumps. Wario shows Starfy how to use the Wario Attack. For Starfy, it is the Shooting Star. They use their attacks to break the boulder successfully. Starfy and Wario go through the trap door. While looking for Moe, they find a path leading outside.

Soon Moe is seen eating at the restaurant that was seen earlier. Moe had found the treasure after he fell through the trap door. Wario and Starfy appear behind Moe looking pretty angry. They both attack him, which sends him flying.