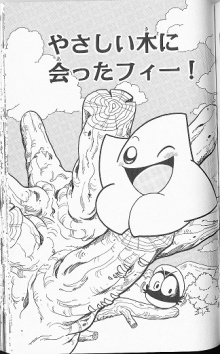 Meeting a Friendly Tree Fii! (Japanese: やさしい木に会ったフィー!, Yasashii Ki ni Atta Fī!) is the ninth chapter of the second volume of the Densetsu no Starfy manga illustrated by Yumiko Sudō.

Starfy and Moe are seen in a forest. They plan to camp there. Moe starts setting up the tent while Starfy jumps in a nearby lake to look for food. Moe realizes he's one tent peg too short to finish the tent. He spots a tree branch that would work perfectly as a tent peg. Moe snaps the branch off the giant tree and uses it to finish the tent. Moe starts to feel hungry and tells Starfy to hurry up and bring the food, Starfy tells him he didn't find any.

That night, Starfy and Moe are inside the tent. Starfy is asleep, but Moe is too hungry to sleep. He hears a growl and starts to worry that a giant dog-faced snake creature is about to eat the tent. Moe starts to panic, but then he realizes the sound was Starfy's stomach growling. Moe then hears another sound and this time Starfy hears it too. Moe believes it's a monster. Starfy believes it could be Ogura. Starfy goes outside the tent and sees a giant tree moaning in pain. Moe comes out and the tree asks for help. Moe gets nervous and runs away. The tree watches Moe jump into the water, but then turns to see Starfy putting a bandage around his broken branch. The tree asks if Starfy is scared of him. Starfy tells the tree he's not scared at all. Starfy's stomach starts to growl again. The tree realizes Starfy's hungry and grows fruit from his head.

Starfy starts to eat the fruit, but Moe smacks him and eats all the other fruit fast. The tree does not seem bothered and introduces himself as Yugudorajii. Yugudorajii tells Starfy and Moe that he's usually treated like a monster and nobody comes to the forest anymore. Starfy tells him he's a good tree and Moe says people would be surprised at first. Yugudorajii tells them he attacks anyone that tries to cut his branches and someone recently cut one of his branches while he was asleep. Moe believes it was him when he used a branch as a tent peg, but he doesn't say it. Starfy wonders how it's possible when nobody's been there in so long. Moe nervously says it was most likely Ogura. Yugudorajii says he knows Ogura and saw him go in the direction of a mountain yesterday. Starfy says they must head that way. Moe starts to hide the branch he used with dirt, and Starfy wonders what he's doing. Yugudorajii feels sad to see them leave, but Starfy tells him they will return.

Later, Starfy and Moe are seen climbing the mountain, but they notice the forest they just left is on fire. Ogura passes by holding a torch, which makes it clear to Starfy and Moe that Ogura started the fire. Starfy jumps into the forest. Moe calls Starfy stupid and tells him he'll die, but then he realizes Starfy was adding the lake's water to his Star Spin to stop the fire. Starfy successfully stops the fire, but Yugudorajii had already burned down. Starfy starts to cry, but a voice tells him not to cry. A small tree comes out of the ground where the branch tent peg was and introduces himself as Yugudorajii. The smaller Yugudorajii tells Starfy and Moe that branches planted in the soil can become new trees. Starfy cries with joy. Moe proudly tells them that he was one who planted the branch. The new Yugudorajii grows some fruit. Moe assumes it's a gift for him, but then Yugudorajii attacks him for breaking a branch off the bigger Yugudorajii.