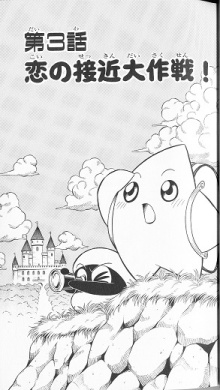 A Battle of Love Draws Near! (Japanese: 恋の接近大作戦！) is the third chapter of the Densetsu no Starfy R manga.

Starfy and Moe arrive outside of the Amiy Castle. Starfy blushes and hopes to make friends with Mattel but Moe calls him "gross". Moe notes that they can't get in because there are Doorkeepers (Japanese: 門番) so Starfy looks for a disguise and finds some maid clothes, which Starfy and Moe wear. Starfy, claiming he is a 'newcomer', is let in by the Doorkeepers as well as Moe. Starly then appears wearing similar clothes and hits Starfy on the head with a brush. Starly, with a whip orders Starfy and Moe to brush the halls saying that she will not forgive laziness. Starfy and Moe talk between themselves but Starly tells them to stop chatting.

Coral suddenly appears thanking everyone for the hard work. This sidetracks Starly who has a crush on Coral but Starly asks him to leave anyway. Starly comments that the prince of the Amiy Kingdom (Coral) is kind and handsome but Moe doesn't know who the prince is and wonders if it is Coral. Starly comments she is going to clean the room of the prince but Starfy tells her to leave. Coral thanks Starly but Starfy takes the brush and Starfy and Moe stand as if they cleaned up the room. Starly takes the brush off Starfy and asks that they do an easier job.

She takes them to a flower bed and asks that they give her some seeds to plant and Starfy tells her to "consider it done". Starly gives Starfy some flower seeds, thinking that Coral loves flowers. Starly shows them how to plant the seeds by dropping one of the seeds in a hole but Starfy uses his Star Spin to make a massive hole and plants many seeds into it. This angers Starly lots, who told Starfy and Moe to carefully plant the seeds.

Starfy notices Starly is talking in the Kansai dialect, so he discovers it is her. Both Starfy and Starly start to pull their hats off (and Starly pulls off her glasses) while Moe discovers that Coral is with Mattel who is stirring a dinner that appears to be a curry or soup. They are shocked to see this and wonder why both of them are together. Mattel says she is making the prince's favorite and Coral says he is looking forward to it. Starfy and Starly interfere with the dinner and put a special kind of liquid and a special kind of paste into it expecting it to make Coral dislike it and force the two to break up. Moe comments that he doesn't want to collaborate with this kind of thing. Coral tries some of the dinner which at a first glance appears to make him ill but later he comments it's tasty, shocking Starfy and Starly. Thinking it must be good, Starfy and Starly try a spoonful of the dinner themselves which they find far too hot. It leaves Starfy and Starly lying on the floor with their mouths burnt. Humorously, Coral comments that Mattel knows his favorite well; hot and spicy.