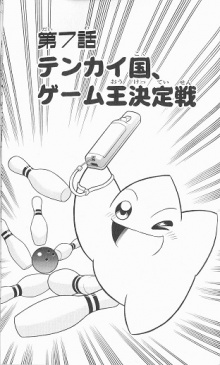 The chapter begins in Pufftop with Starfy on a chair playing on his game console resembling a Nintendo DS called the FS (which is pronounced "fee-S") with food and books next to him. He has accomplished something and is happy. Suddenly, Starfy can hear Starly shouting for him. She is playing tennis on a game console called the Tenkaido Fii (Japanese: テンカイ堂 Fii), resembling the Wii. She then plays boxing, beating up a character resembling Starfy telling Starfy how the player plays with both the remote and Nunchuk. Starfy breaks his FS in half and makes what he calls the "Nunchuk Type FS" (Japanese: ヌンチャク型FS), although later Starfy is using his FS in its complete form again.

Starfy says the FS is useful because it can be carried anywhere and played anywhere. Angry, Starly gets out a console resembling the Nintendo GameCube called the Gamefyube (Japanese: ゲームフューブ) and says it is able to be carried around too. Starfy shows off the FS stylus while Starly shows off the Fii Sensor Bar and they start fighting over who has the best console, with Starfy arguing that the FS has two screens and Starly arguing that the Fii can connect to the internet.

A silhouette appears in the background who turns out to be Moe. His appearance stops the fighting. Starfy and Starly decide to compete to see who is the best at playing the consoles. First, they have a game of Fii Golf and Starly goes first, scoring a hole in one. Starfy, saying it is "no big deal" anyway uses his Star Spin while holding the Fii Remote and sends the ball flying out of bounds. Starfy jumps up saying "home run!" and Starly says the game is not baseball. Next up, Starfy and Starly compete in a FS puzzle game resembling Tetris. Starly is horrified to see that Starfy is winning and she has lots of blocks piled high. Starly finds that Starfy is using an FS with three screens however, and that is why he's winning.

Starfy stops playing the FS and starts to play on the Fii, so Starly starts playing on a FS, annoying Starfy. Moe appears again and they calm down and agree that both the FS and Fii are good and they happily start playing the FS and Fii together. Moe does comment in the end that he thinks the "Fimicom" (based on the Famicom) is the best system, though, and he starts playing a game called "Orima Brothers" (Japanese: オリマブラザーズ) resembling Mario Bros.