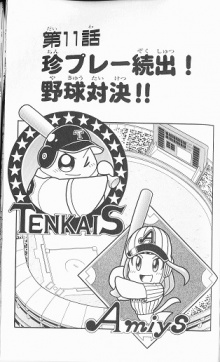 The chapter begins on a baseball field where the Pufftop Kingdom and the Amiy Kingdom are having a baseball match. Starfy wants to win so he decides to practice batting with Moe before the game starts. He also decides to read a rule book on the game.

When the game begins, Starfy plays as the batter and Coral plays as the pitcher. Coral throws the ball and Starfy misses it and it rolls a long way across the field. The referee then calls for Starfy's team and tells Starfy something. Later, female citizens of the Amiy Kingdom in the audience, possibly including Mattel, praise Coral and call him 'wonderful'. Coral starts to sweat so they offer him a handkerchief. Starfy jumps towards the audience and asks Moe for one as well.

Starfy uses a hammer to hammer a nail into a wooden plank and apparently uses it to change the Amiy Kingdom's scores. The players change roles and Coral becomes the batter and Moe becomes the pitcher. Another member of Starfy's species plays as the catcher. Moe throws the ball and Coral misses it. Coral looks at a board and is disappointed because there appears to be two players out already.

Later, a helper walks into the field and she is revealed to be Starly but she is part of the Amiy Kingdom's team instead of Pufftop's team. Starfy shouts at Starly for betraying his team but Starly doesn't care. A character resembling Starfy with ears and Starly take over Starfy and Coral's roles as pitcher and batter, respectively.

The Starfy lookalike throws a "magic ball" (Japanese: 魔球), also known as a "Star Ball" (Japanese: スターボール) that goes back to him forming the shape of a star, confusing Starly.

Moe plays as the pitcher again and throws the ball towards Starly. She misses it and the ball gets caught by the catcher Ifirō (Japanese: イフィロー), who resembles Starfy with a mustache and beard. Ifirō fires a laser beam at Starly and the referee calls a "three-out change".

Starfy plays as the batter against Starly as the pitcher and Starfy manages to score a home run, also hitting Moe with the bat. The chapter ends with the referee complimenting Starfy for an impressive home run and Starly and Moe shouting at the referee.