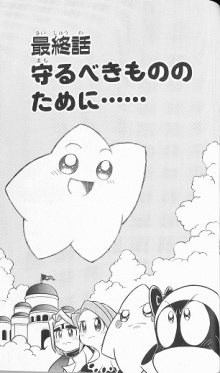 For Those Whom I Must Protect‌...‌... (Japanese: 守るべきものの ために……, Mamoru Beki Mono no Tame ni......) is the thirteenth chapter of the Densetsu no Starfy R manga, and the final chapter of Volume 1.

The chapter is set at Pufftop Palace, and begins sometime in the morning or day in which Moe is wide awake but Starfy is still getting out of bed. Moe comes rushing into Starfy's room, to wake him up and tell him that something terrible is happening. Moe turns on the television to watch the news ("TNN"), and the news reporter exclaims that a meteor is falling from the sky and is about to hit Pufftop. Starfy and Moe look out of the window, and find to their own horror that the meteor is indeed going to hit Pufftop.

Moe is frightened, but Starfy tells Moe to calm down. Starfy walks out into the main passage with a cart full of goods, but Starfy is walking far too slowly, so Moe quickly runs up to Starfy and pushes him along. Starfy and Moe find Starly and many Pufftop Guards who urge Starfy to save Pufftop Palace. Starfy and Moe also see Mattel and Coral walk through the entrance to the palace, and Coral worries that the meteor may hit the Amiy Castle. Mattel talks to Starfy, and this makes him think of her. Starfy, Starly, Moe, Mattel and Coral join an assembly of mainly other members of Starfy's species, and it is announced that in one minute the meteor will hit Pufftop.

Starfy shoots up into the sky to strike the meteor, and all of the others are in shock, possibly in fear for his own safety. Starfy uses an attack similar to his Shooting Star ability to successfully puncture a hole which goes all the way through the meteor. Pufftop Palace is still damaged, but the meteor is projected to land into the ocean instead of Amiy Castle, to the relief of Mattel and Coral. Starfy, Starly, Moe and the Pufftop Guards then start work on repairing the Pufftop Palace.