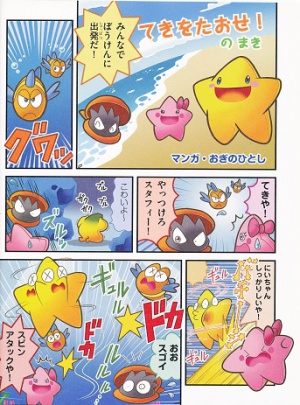 Defeat the Enemy! (Japanese: てきをたおせ!) is one of three short manga based on The Legendary Starfy featured in the November 2008 issue of Enterbrain's Video Game Magazine on page 28. It was created by Hitoshi Ogino. The other 'volumes' inside the magazine are Hidden Room Discovery! on page 30 and Combined by Transformation! on page 32.

Starfy, Starly and Moe begin their adventure together and they are shown on a beach. In the sea, a group of two enemies closely resembling Fwips swim after them, shocking Starly. Moe comes over to Starfy expecting him to help, but he says he is scared. Starly slaps Starfy causing him to spin which then makes Starfy defeat the fish enemies. Moe is pleasantly surprised.