From Starfy Wiki
(Redirected from Enemies)
Jump to navigationJump to search 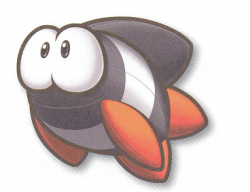 Enemies (Japanese: 敵) are characters in The Legendary Starfy series that usually come in Starfy and Starly way on their quest and can damage them. They are different from Friends, which are characters that can usually be talked to or are important to the story. Most enemies, but not all can be defeated.

In Densetsu no Starfy 4, depending on the enemy and the way they hit the player, enemies will deal a set amount of damage or half Starfy or Starly's health points (Shinigami and Degil's swallow and spit out attack only) to the player character. In other games, when enemies hit Starfy or Starly they only deal one heart, except for Master Lobber's "clakkity" move or if Mashtooth swallows Starfy through his nose.

There are some harmless and/or helpful characters that may be classed as 'enemies', such as the Puffy Chub that Starfy must keep up the ground in the "Juggle This" Side Quest or Upon that may be used to send Starfy or Starly flying into the air. Fork is classed as an enemy in the first four games, while in The Legendary Starfy, he is classed as a Friend.

After completing the games, there is an available feature known as the Toys (North American and Australian versions of The Legendary Starfy), Picture Book (all Japanese games except Densetsu no Starfy 3) or Trading Cards (Densetsu no Starfy 3), which is an encyclopedia of characters and enemies with descriptions. Enemies are usually registered to this feature by defeating them, while certain enemies that cannot be defeated may be registered by meeting them or touching them.

There are various listings of enemies on the Wiki.