Konk (known in Japan as Bonbone) is a recurring boss in The Legendary Starfy series. He is the first boss in the first four games of the series, and also the bonus boss in level 9 of the The Legendary Starfy. He is a well known bully who constantly pesters Starfy and his friends, however he is hardly considered a dangerous threat and is seen as more of an annoying nuisance. He appears to have an odd quirk where in the middle of his sentences, he tends to blurt out the word, "KONK!", hence his name.

In this game, Konk is fought during the events in Coral Reef. After Starfy saves Moe from the Fork brothers, he tells Starfy that Konk kidnapped Ruby while he was talking to her. Starfy then saved her by beating Konk.

Konk returns, but this time in Lobber's Cave. Puchi Ogura #1 most likely asks for Konk's aid in defeating Starfy, however both end up being defeated by the heroic prince once again.

Appearing again in Lobber's Cave, Konk used a Helmet to protect his head and make him invulnerable to Star Spins. Starly overhears that exposing Konk to a Light for too long makes Konk too hot while wearing the Helmet, so she moves the Light to have Konk stand underneath it for ten seconds. This proves too much for Konk and the Helmet flies towards Starly, which Starly picks up.

Just after, Konk corners her. Starfy and Moe come just in the nick of time. Konk retreats, but Starfy follows him and ends up beating him again.

Konk appears once again, but this time with a different shell and darker eye lids. According to Amiiyoshino, Degil seems to have powered him up with the power of the Mon Amour Stone. During the events in Lobber's Villa, he steals a rose required to enter the Spring of Love, but Starfy manages to beat him again for the fourth time.

Konk appears in The Legendary Starfy as the boss of the ninth level, Pufftop where he is fought by Starly. After managing to break into the royal castle while it was under attack by Mashtooth's minions, he encountered Starly and challenged her to a battle thinking that this time he would achieve victory and get his revenge for his previous defeats, however like always he was defeated by the younger sister of his arch rival, but this would not quell his desire for victory and he continued to challenge Starly every time they encountered each other, but despite his numerous tries he failed to defeat her. He later makes an appearance on the "The Moe Show" where he is looking for Starfy in hopes of asking for his autograph (however this scene should not be taken seriously and was most likely added for comical effect and does not mean that Konk has given up his rivalry with Starfy).

Konk is a sky blue colored sea whelk who lives in a Tannish peach colored conch shell, or possibly a "KONK!" shell according to his Toy description from The Legendary Starfy. When appearing in Densetsu no Starfy 4, he had a much more colorful shell, which had a small heart and also yellowish orange spikes. Konk has gills on his head, which likely help him breath above and below water. Konk also has two paws which he uses to hold onto his shell.

Konk is more of a harmless bully than an actual enemy to Starfy and his friends. He loves Ruby, and often gets into fights with Moe because of Moe's love of Ruby.

The Legendary Starfy describes him as "More harmless than harmful." 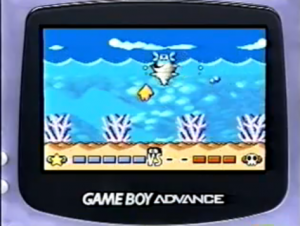 Starfy fighting Konk in the commercial for Densetsu no Starfy.

Konk will spin rather fast. Starfy or Starly will have to attack him from above.

In Densetsu no Starfy 3, Konk gains a new attack in which he stops in place for a second, holds his breath and spins very fast. This attack leaves Konk dizzy for a few seconds though, rendering him vulnerable to attack.

In The Legendary Starfy, he re-uses his shell helmet to protect his head during his jump attacks, and spins fast. When Konk's health is low, he will cover the boss arena in a net and attempt to spear Starly! Turbo Swim left or right in the net and dodge Konk's attack! 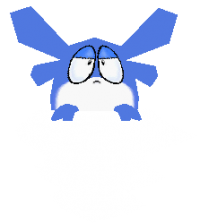