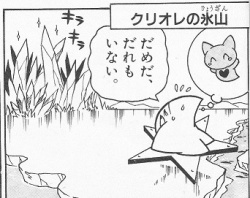 Starfy revisiting Kuriore's Iceberg in The Sealed Jar and the Big Disturbance Fii!, looking for Kuriore

Kuriore's Iceberg (Japanese: クリオレの氷山) is a location in Densetsu no Starfy manga illustrated by Yumiko Sudō that first appeared in the fifth chapter of the first volume, Search for Treasure Fii! and later appeared as one of the locations Starfy revisited after he was sucked into the long jar in the eleventh and final chapter of the second volume, The Sealed Jar and the Big Disturbance Fii!. It is relatively close to the Sea of Ice and Kuriore's House is there. It is a body of floating ice with icy spikes.

In the events of "Search for Treasure Fii!", Starfy and Moe swam with Kuriore to the Sea of Ice while looking for something sparkly so that Moe could impress Ruby. They soon arrived at Kuriore's Iceberg but Starfy slipped across the ice and bumped into Moe, causing him to bounce off some hard ice and into a hole. Moe thought he found Ruby there but it was actually Lovely who Moe didn't like the look of.

Later, Kuriore's Iceberg was under attack by Boerun who claimed that the Sea of Ice belonged to him. Boerun fired an icy blast towards Starfy, which hit Kuriore and trapped her inside of an ice block. Starfy failed to unfreeze Kuriore by rubbing the ice block, however, after attacking Boerun with his Star Spin, he ended up making Boerun fall head first into ice, which made a hot spring appear that thawed Kuriore out.

After defeating Boerun, Starfy and Moe left Kuriore at her house with Lovely. Moe found a Treasure Box full of sparkling diamonds in Kuriore's Iceberg for Ruby, but unfortunately water from the hot spring went inside the Treasure Box and the diamonds started to melt. Moe then knocked the Treasure Box away and all the remaining diamonds fell into the sea.

In "The Sealed Jar and the Big Disturbance Fii!", Kuriore's Iceberg was one of the eight places Starfy visited using the Pufftop Vehicle after he got sucked into a long jar.