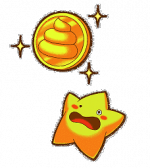 Artwork of Starfy getting the wrong side of the coin

Magical Coin (Japanese: まじかるコイン) is an ability in Densetsu no Starfy 4. It is the second Spill ability in the game. It is taught to both Starfy and Starly by Prince Coral in Hidden Village of Koimaro, provided that Starly is exposed to the light of the Random Flower.