Monstar (Dorampa, ドランパ in Japan) is the first transformation in The Legendary Starfy that Starfy turns into. Starfy first morphs with Bunston to become Monstar in Gluglug Lagoon's Area 3, 'Mysterious Powers'.

The player can use the Y button to make it breathe fire, which is an ability known as Spicy Belly. During the game, Starfy can find another Monstar Transforming Stone in Hotcha Springs's Area Secret 3 that increases the size of its fire breath. The upgraded ability is called Super Spicy Belly.

After the player first gets to use Monstar against Big Squiddy in Gluglug Lagoon (Stage 1-3), it becomes available as a costume in the 'Bunston' section of the Stuff. 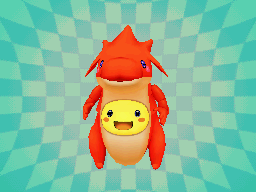 Starfy wearing Monstar in the Stuff

During the course of the game it is revealed that the Monstar transformation is the result of special Transforming Stones originally owned by a large Monstar named Modo who gave this to the shape-shifting Bunnerans so they could use it to help them with their daily lives (such as cooking). This also confirms that Monstars are actually a species which the Bunnerans mimic.