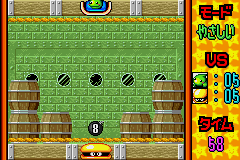 Panic Boom (Japanese: パニックドカン) is a minigame in Densetsu no Starfy, which is first available by talking to Miguana through a door in the Sunken Ship. Miguana asks Starfy to play with her children. If Starfy meets Miguana after beating the game and completes the minigame on hard mode, Miguana will lead Starfy to a room with eight Pizzaps to help with completing the Picture Book.

Moe and one of Miguana's children start with five lives. Bombs will appear on the screen with a number on it which will decrease until the number reaches zero. More bombs will appear on harder difficulty settings. The bombs will initially move towards one of Miguana's children but he/she will push it towards Moe. The aim is to have the bombs explode on the Miguana child's side five times to reduce his/her lives to zero. If the bomb explodes and it was on Moe's side the player will lose a life. If the bomb explodes and it was neither close to Moe or the Miguana child nothing will happen.

There is a time limit of 60 seconds on each difficulty setting. If the time runs out the player with the most amount of lives is the winner. If both players have equal lives it still counts as a loss for Moe.