Difference between revisions of "Bunston"

“There's no time to waste... I'm coming to help, Bunnera! And I'm bringing along a legendary, heavy-hitting hero... Starfy! Just hang on... I'm on my way... I'll be there soon...”
—Bunston, The Legendary Starfy
Bunston (Rampa in Japan) is a character introduced in The Legendary Starfy (known as Densetsu no Starfy Taiketsu! Daīru Kaizokudan in Japan). He is a blue bunny-like creature wearing a red spacesuit with a green helmet, orange jet pack, red eyes and is a prince like Starfy. He first meets Starfy after having fallen through his roof from Planet Bunnera, his homeland, which was attacked by the Space Pirate Mashtooth.

Although Bunston cannot be controlled alone, in certain rooms in the game he appears with a thought bubble above his head. Inside the thought bubble is a small image of a monster (called "Monstar"), seal (called "Starpedo"), ghost (called "Starfright"), or rooster (called "Roostar"). These powers are remembered by Bunston through progression in the story as Starfy and others collect the Shards to Bunston's ship. Player can keep track of Bunston's remembered powers via the Bunston's Collection menu. If Starfy touches the thought bubble, he morphs with Bunston to gain the ability pictured. If Bunston has not remembered the power, the ability will not be pictured and the player will not be able to use it. These abilities are all unique: Monstar's ability allows Starfy to breathe fire (Spicy Belly); Starpedo's ability freezes, then breaks Deep Ice in arctic regions using a giant icicle (Icy Spike), making them passable; Roostar's ability provides Starfy to be able to make loud Bugawks that can also be used to use Liftwisps and make Stanglers and Lurchins not damaging anymore, making them as temporary platforms, and lay chicken eggs (Bugawk); Starfright's ability lets Starfy drop "will-o-wisp"s (ghostly fires) around foes, make him disappear for a while, and make him float around (Vanish).

In the last Secret levels of certain Stages, there will be extra Transforming Stones for the forms, making them more powerful. The power will be later used in that level to highlight its additional features. The upgraded Powers are needed for collecting certain Treasures. 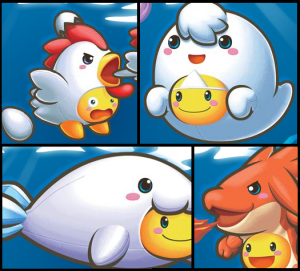