Difference between revisions of "DSM02" 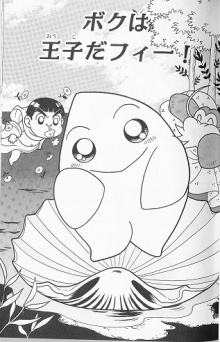 I'm a Prince Fii! (Japanese: ボクは王子だフィー!, Boku wa Ouji da Fī!) is the second chapter of the first volume of the Densetsu no Starfy manga illustrated by Yumiko Sudō. It follows on from the events of chapter one.

In the Human World, Takeo asks Starfy if he's really not a robot and Starfy is insulted, saying it's obvious that he's not. Old Man Lobber tells Takeo that Starfy is the honorable prince of Pufftop. Starfy shows Takeo what Starfy thinks is the grace of the prince; his signature Star Spin attack. Takeo still isn't convinced and he picks Starfy up looking for a switch, tickling him, but Takeo cannot find one.

Starfy starts doing press-ups and Old Man Lobber says he isn't allowed to be made prince and Starfy starts to cry. Starfy says he has five sides and comments that it is impossible to count 100. Later, Starfy and Old Man Lobber find a 'castle' called the "Pachinko Plaza" (Japanese: パチンコプラザ), which is actually a store, and Starfy wants to live in it. Takeo, embarrassed, comments that it's not a castle. Old Man Lobber says that the owner of the 'castle' ought to sell it to them if they pay them a lot of money. Starfy comments that 'Old Man Lobber is a know-it-all, isn't he?'. Takeo says they will need so much money but Starfy says that he is full of money, even though he probably doesn't have any money.

Old Man Lobber and Starfy walk in, only for the shopkeeper to pick them up and bring them out again. The shopkeeper asks if Takeo is a robot then punches the top of his head and angrily walks back in to the shop, telling him to play elsewhere. A large bump appears on Takeo's head and Starfy picks up a shell. Takeo implies it's no good for him being with Starfy and Old Man Lobber. Starfy seems sad to hear that but tells Takeo to go if he insists.

Takeo hears the voice of Rumi-chan and Rumi-chan is delighted to see Starfy; who she calls Takeo's friend, jump into her hands. Rumi-chan wonders where she should play with Starfy but Takeo pulls an angry face then pulls a grin, saying something that leaves Starfy suspicious. Takeo arrives at a house (possibly either his or Rumi-chan's) and introduces Starfy and Old Man Lobber to a dog, probably named "Pes" (Japanese: ペス). Old Man Lobber says the house is pretty nice and Starfy agrees.

Starfy spins around and injures himself. Old Man Lobber looks after Starfy in a bed, who he agrees to call 'prince' and puts a wet flannel on his head. Starfy is in pain and Takeo thinks he is sick. Starfy says he has a sore back because the bedding is too thin.

Takeo hears someone call his name and he gets annoyed and thinks 'now what'. Starfy jumps around playfully wearing sunglasses and Takeo wonders why he isn't asleep if he's tired. Old Man Lobber tells Takeo that Starfy often shows a dance, and he starts dancing around Takeo. It is explained that it is an attempt to reassure Starfy and become healthy.

Starfy goes upside down and strikes Takeo on the head. Old Man Lobber says that it is time for dinner, so Starfy, Old Man Lobber and Takeo get ready to eat, and Takeo pulls off the material covering the food. Starfy tips over his bowl looking for money. He opens up a clam but Takeo says there is no money inside it (perhaps Starfy was looking for a Pearl?).

Old Man Lobber talks about Starfy's Star Spin and Starfy wants to use it. Takeo says he is going into the garden but before he can, Starfy uses his Star Spin and causes some debris to fall on top of him, Takeo and Old Man Lobber, also covering the area with dust. Rumi-chan was looking for Takeo and was about to give him a present but she can't find them and walks away, wondering if she made a mistake. Takeo tells Starfy not to use his Star Spin in the house anymore.