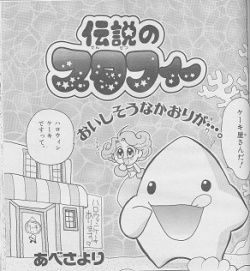 Smells Delicious... (Japanese: おいしそうなかおりが...。) is a chapter from the Densetsu no Starfy manga illustrated by Sayori Abe. It appeared in the November 2002 issue of Shougaku San Nensei (Japanese: 小学三年生) from pages 87-90.

Starfy and the Mermaid are outside a Halloween cake shop. Starfy seems excited to get some cake. A Sand Snark with a chef's hat on then tells them that it's his shop and welcomes them, but his appearance apparently scares away the Mermaid, Moe and Old Man Lobber.

Starfy talks to the Sand Snark and he shows him a Halloween turbun shell cake but Starfy runs off. The Mermaid is seen running away and she then stops to make something herself. She makes a pumpkin pie and shows it to Starfy, the Sand Snark, Old Man Lobber and Moe. The Sand Snark is surprised by this and holds the Mermaid's hand, saying that she could work for him in the store.

The Mermaid replies yes, but only if she or he can look after Starfy. The Sand Snark gets angry and aggressively keeps hold of the Mermaid's hand. The Mermaid says she's not going to work for him easily, and asks Starfy for help, so Starfy beats up the Sand Snark with his Star Spin.