Super Princess Peach (Japanese: スーパープリンセスピーチ) is a Mario series Nintendo DS platformer game produced by TOSE and Nintendo that was released in Japan in October 2005. As is true with the majority of games developed by TOSE, TOSE are not directly accredited as developers in the game.

In 2006 the game was localized overseas for North America, Australasia and Europe with added support for the Nintendo DS Rumble Pak.

The game references The Legendary Starfy series, with the the inclusion of a 'Starfish' enemy resembling Starfy wearing sunglasses that has the glossary entry "a star-shaped foe rumored to be the prince of a kingdom?".

Super Princess Peach is the first official adventure game in the Mario series starring Princess Peach as the primary protagonist. Princess Peach sets off to rescue Mario and others with the help of a magical umbrella called Perry and her emotions (referred to as 'vibes'). Various enemies on Vibe Island are affected by different vibes.

As Princess Peach, the player can touch one of four heart panels corresponding to the vibes 'Rage', 'Gloom', 'Calm' and 'Joy' for special powers provided that there is enough charge in the Vibe Gauge. These powers are often required to advance through a level. The Vibe Gauge can be replenished by absorbing enemies into Perry and collecting blue crystals. At the end of every stage is a boss level requiring Princess Peach to perform one of her vibes. At the end of each boss battle, Perry recalls an important part of his history.

Super Princess Peach is set on the mysterious Vibe Island. Vibe Island is a place that is a not far from the Mushroom Kingdom and is said to hold "great power". Found on the island is an item known as the legendary Vibe Scepter that is the source of much power. Bowser heard about the island and built a summer villa there intending to find the Scepter and take control of its powers.

Some time later, Bowser was sitting in his villa while the elite Army Hammer Bro. arrived to tell Bowser 'they' [presumably Bowser's minions] had found the scepter. He exclaimed loudly that they would finally have revenge on Mario and "his annoying pals" but the Army Hammer Bro. had left the door open, so Bowser appears to ask a Goomba and a green Koopa Troopa to close the door. The player must then shut the door using the touch screen, and Bowser laughs about showing Mario and others "who's boss".

Bowser remarks that the scepter is stronger than he thought and wonders about the true powers of the scepter. Shortly later, the Goomba returns to the villa and the Army Hammer Bro. asks the Goomba to come with him and bring the scepter. The Goomba waves the Scepter back and forth, revealing that it has the power of changing the emotions of others. The sceptre changes the vibes of Bowser and other minions present, making them feel angry, sad, joyous and calm.

Toadsworth runs back to Princess Peach and orders her to come back to the castle, suggesting that it's dangerous for her to move out alone. Princess Peach replies that she must save Mario this time. Toadsworth accepts this, but insists that she brings the magical umbrella, Perry with her. Toadsworth had recently found Perry at a shop and believes he will come in handy in Peach's adventure. Perry replies that he can help her with beating enemies and that he knows everything about the island.

References to The Legendary Starfy series

This section is a list of references to The Legendary Starfy series in Super Princess Peach.

Sprite of the Starfish

The "Starfish" (Japanese: スターフィッシュ, Sutāfisshu) [1] is an enemy that has a small chance of appearing in one location in Hoo's Wood (Stage 2-5), Wavy Beach (Stage 5-5) and Gleam Glacier (Stage 6-4). Its Glossary description, "a star-shaped foe rumored to be the prince of a kingdom?" may be a reference to Starfy who is the prince of Pufftop.

Perry Blocks are placed nearby where it appears which describe it as a "very odd enemy" shaped like a '☆' that has been 'spotted all over'.

The 'Starfish' acts in similar ways to Starfy from The Legendary Starfy series.

Super Princess Peach shares a number of gameplay elements that are similar to other The Legendary Starfy series games. 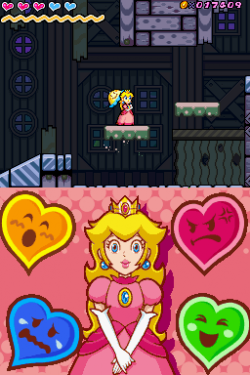 Levels in Shriek Mansion, Fury Volcano and Bowser's Villa feature fragile platforms that require Princess Peach to walk slowly on them using the L or R buttons. Similar platforms are used in Misty Town in Densetsu no Starfy 3 that require Starfy and Starly to glide on to them and walk slowly to avoid breaking them. 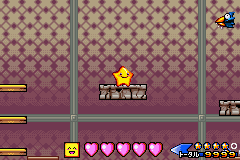 Fragile platforms in Densetsu no Starfy 3

Some of the different menus in Super Princess Peach are similar to those featured in The Legendary Starfy series games.

The Glossary (Japanese: ずかん, Zukan) is an index of enemies including bosses listing a number of descriptions about enemies that Princess Peach has defeated.

This menu is similar to the Zukan menu in other The Legendary Starfy series games, or the Trading Card menu in Densetsu no Starfy 3, which indexes and describes characters met by the player, as well as enemies and bosses defeated by Starfy and Starly. In The Legendary Starfy, the Zukan (localized as 'Toys') is different, and is a capsule toy system is used where the player must buy a capsule containing a random character enemy or boss for 5 pearls in order to add it to the Toys menu.

Super Princess Peach has a Shop menu that allows Princess Peach to exchange coins for upgrades to her abilities, upgrades to Perry, music for the Music Room, and puzzle pieces for the Puzzle menu. The Shop is a similar system to the shops in previous The Legendary Starfy games and Densetsu no Starfy 4 which allow the player to exchange Pearls purchase costumes and music. In Densetsu no Starfy 4, life upgrades can also be purchased from the shop.