From Starfy Wiki
(Redirected from Tose)
Jump to navigationJump to search 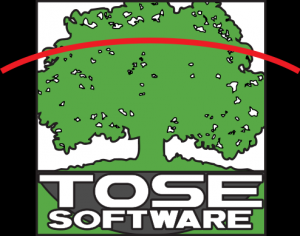 TOSE's logo, which originated from at least 1998.

TOSE, also referred to as Tose, commonly appearing as 'TOSE' in games that it has developed[1] (Japanese: 株式会社トーセ) is a Japanese game development company that co-develops games in the The Legendary Starfy series with Nintendo. It is also referred to as TOSE SOFTWARE on its website and in logos, but not every logo. It is based in Shimogyō-ku, Kyoto. It shares the copyright to the series with Nintendo and owns part of the copyright to the tankōbon for the The Legendary Starfy series manga as well as the games.

TOSE branched out from its parent company Toa Seiko in 1979 to specialize in the development and sale of arcade video game machines [2] and have since moved on to developing many games for different consoles. Since its inception in 1979, TOSE states to have contributed in the development of over 1000 games, but do not reveal most projects which they have worked on due to confidentiality agreements. [3] Despite this, TOSE openly credits themselves for their partial ownership of the The Legendary Starfy series.

Nintendo and TOSE have co-developed games in the The Legendary Starfy series. The inspiration for the The Legendary Starfy series came from an instruction from Hitoshi Yamagami's boss in November 1995 to come up with some kind of 'floaty platformer'. Later in this game's development, Hitoshi Yamagami and TOSE producer Yasuhiro Minamimoto worked together to produce it. The game was originally a balloon-lifting game until plans were changed and the main character was decided as a starfish in an early version of Densetsu no Starfy for the Game Boy. This character eventually became Starfy, who was decided to be neither a star or a starfish.

As well as the The Legendary Starfy series, TOSE is well known for developing Super Princess Peach (with Nintendo), where a "Starfish"; resembling Starfy wearing sunglasses, cameos as an enemy. TOSE are also known for developing games in the Game & Watch Gallery series of video games. TOSE are often known for never directly accrediting themselves in the games which they developed, with the exception of the The Legendary Starfy series where both Nintendo and TOSE share the copyright to the series. Another popular game where TOSE are disclosed as developers is Dragon Quest VIII, where developers from TOSE are indicated as such by having (TOSE) after their name. According to an interview in the Nintendo Power magazine, even though TOSE have apparently developed or co-developed over 1,000 games since their inception in 1979, they are always 'behind the scenes' and like it that way.

The Invention King logo circa 2000