According to Famitsu, to celebrate the release of the Densetsu no Starfy Trumps, a special campaign was launched in which 50 lucky people could win a star-shaped Starfy balloon. It is unclear whether this was an official promotion or an offer by Famitsu. [1]

54 playing cards are included in each edition. Each edition contains cards that are exclusive to that version. It appears that different packets of the same edition may contain different cards because certain cards featured on the official Densetsu no Starfy mini-site aren't included in every pack.

A foldable instruction and caution sheet is included which teaches players how to play. The cards are initially protected by plastic packaging.

Opening the 'Starfy Swimming in the Sea' version

Starfy Swimming in the Sea 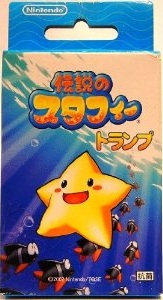 The packaging of the Starfy Swimming in the Sea edition

Various cards shown on the Densetsu no Starfy official mini-site for the Blue edition, including Balloon, Hebiru, Amebrush, Wotsaruto and Ogura

Starfy Standing on the Beach 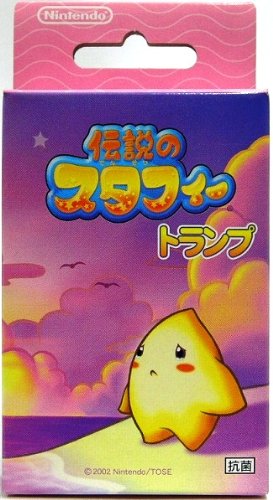 The packaging of the Starfy Standing on the Beach edition

Various cards shown on the Densetsu no Starfy official mini-site for the Pink edition, including Zuratta, Taruika, Akua, Boerun and Herman