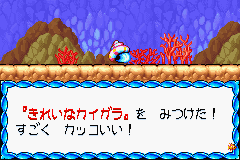 Obtaining the Pretty Shell in Densetsu no Starfy

In Lobber's Cave, after leaving the Dentalium Shell with Herman, Herman teaches Starfy how to use his signature Star Spin attack. After breaking some blocks with his Star Spin, Starfy later finds the Pretty Shell. Starfy gives the shell to Herman. Herman is grateful for this, and happily spins his temporary home off his back and wears the Pretty Shell. On Starfy's quest quest back to Pufftop, Herman leads the way to Coral Reef. 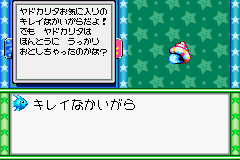 In Lobber's Cave (Stage 1-2), Starfy, Starly and Moe meet Herman wearing his Pretty Shell, also known as simply the Shell (Japanese: かいがら). However, in the middle of the conversation he runs off and replaces his shell with a cardboard box. Herman teaches Starfy the Star Spin again and asks him to relocate his shell. After travelling through several rooms, Starfy finds the Pretty Shell. Starfy returns the Pretty Shell to Herman who then rewards Starfy with the Conch Hat Treasure.