Runosaru is a monkey who is an artist. She has only appeared in Densetsu no Starfy 4 where she teaches Starly how to Crawl. In the story, she was hired to draw a large portrait of Degil in Stage 2-3 (Tree of Beginning), but accidentally spilled a lot of paint. She asks Starly to sweep ink blots off the painting.

In order to do this, Starly must crawl on top of four moving platforms each holding a paintbrush and use the paintbrush to sweep the painting. As a reward for cleaning the painting, Runosaru rewards the player character with a treasure chest containing the Versailles Wig Accessory.

Standing on top of one of these platforms causes the attached paintbrush to fall. It will however, reappear if Starfy or Starly move off of the platform again. 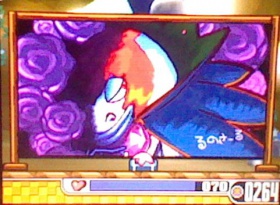