Shinigami is an enemy that cannot be defeated and only appears in the background as a 3D model in Densetsu no Starfy 4. It only appears in one level of Degil's Castle. Shinigami will gradually get closer to the player character and deplete half of the player's hit points as soon as it gets close enough. The only way to repel it back is by touching the chandelier in the level and the blinding light will back it away towards the back of the room. 2D sprites of the Shinigami will appear in the Picture Book.

Shinigami in his 2D sprite form. 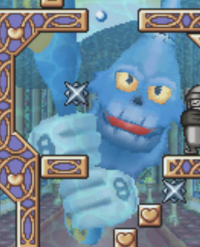