From Starfy Wiki
Revision as of 10:37, 30 March 2018 by TheFlameChomp (talk | contribs) (TheFlameChomp moved page DSM11 on wheels to DSM11 over a redirect without leaving a redirect)
(diff) ← Older revision | Latest revision (diff) | Newer revision → (diff)
Jump to navigationJump to search 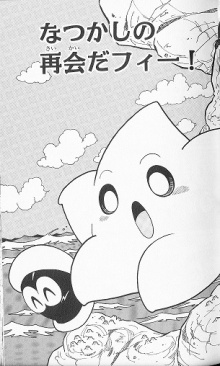 Nostalgic Reunion Fii! (Japanese: なつかしの 再会だフィー!, Natsukashi no Saikai Fī) is the third chapter of the second volume of the Densetsu no Starfy manga illustrated by Yumiko Sudō.

The chapter begins with Moe searching for Starfy. They got separated after Starfy chased after Ogura and attempted to save Mama Star. Moe soon finds Starfy and believes he is upset, but then Starfy starts singing cheerfully. Moe then yells at Starfy, saying that people are worried about him, but Starfy convinces Moe to sing as well. Moe realizes the song they're singing is about the Star Spin and tells Starfy about it. Starfy tells Moe that he forgot part of the song. Moe suggests that they 'work together' and cheers him on, but Moe then stomps on Starfy, possibly as an attempt to jog his memory.

Later Starfy and Moe go inside a cave. Starfy thinks that Mama Star may have been trapped there and Moe thinks it may be haunted. They are quickly attacked by bats. Starfy and Moe soon believe they have escaped the bats, but then they see a bat biting Moe and sucking his blood.

Once they get rid that bat, they start hearing a voice. They follow it and end up finding Old Man Lobber. Starfy becomes overjoyed and runs to him in tears, remembering the good things he did for him, like raising him up when he was a baby and giving him the coconut in We'll Absolutely Meet Again Fii! (volume 1, chapter 6). He is glad the Old Man Lobber is alive after he got separated from Starfy after getting swallowed by The Whale. Moe starts to cry as well, but then Old Man Lobber asks who they are.

They escape by swimming in the ocean. Starfy starts to sing again and attempts to remember the part he forgot with no success. Soon Old Man Lobber is seen staring at the moonlit ocean while singing the part of Starfy's song he forgot. His memory has returned again. Once Old Man Lobber finishes singing, he starts to cry and does not want them to leave him.