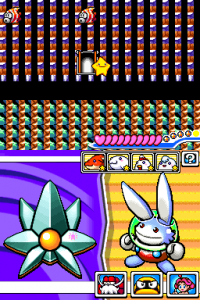 Stage (blank) (based on the name from the Pause Menu) is a partially unused Stage in The Legendary Starfy. This Stage includes multiple test Areas, and also seems to host the maps shown for ability demonstrations. Attempting to exit out an Area in the Stage with Back to Map may tell the player that they must clear the Area first. If this is bypassed, the game may take the player to a copy of the Gluglug Lagoon map but with no name (and with seemingly inaccessible Areas).

Most of the maps in Stage (blank) have broken graphics and/or cause graphical errors, if force loaded. There is also a map in this Stage with Moe. Talking to him loads some text related to multiplayer, but it is only rendered correctly in the Japanese version. Another map contains a floating Herman, which freezes the game in both the English and Japanese versions.

If the player tries to load Mermaid Gossip in this Stage, the game may freeze.

This Stage can be accessed with (internal) cheat codes 027C3B04:XX (map modifier), 027C3B05:XX (area modifier), 027C3B06:XX (stage modifier); with 027C3B06 being set to 00, and the map modifier/area modifier being set to a (typically low) value such as 01 (map 1), 02 (map 2) and so on. To use them, they must be enabled while already in an area and the player must enter a door. These codes were generated for an emulator and may not work on a real Action Replay cheating device.