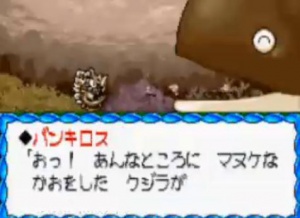 Bankirosu, about to be swallowed by the Whale.

In the events of Densetsu no Starfy, Bankirosu is swallowed by the whale. Inside her body, he gives her a bellyache which causes her much pain. Starfy, after entering her body through her mouth, upgrades his spin attack and then confronts Bankirosu in an attempt to relieve the whale of her suffering. After Bankirosu is defeated, The Whale's bellyache resides.

In battle with Bankirosu, Starfy is surrounded by spiked walls. Bankirosu is invincible as he is covered in spikes and any attempt to attack him is futile. His attack involves curling into a ball and ramming into Starfy. In order to defeat him, Bankirosu must miss Starfy and hit the spiked wall instead. This will disable his use of spikes allowing him to be damaged with a Star Spin. After taking damage, Bankirosu will regrow his spikes and move faster. Once his life bar is defeated, Bankirosu will disappear completely.

He appears once again in Densetsu no Starfy 3 as the boss of Gabun Ocean Trench. This time around he was swallowed by the giant robot "whale" Gabun, and much like the Whale before him, Bankirosu was also causing him internal pain.