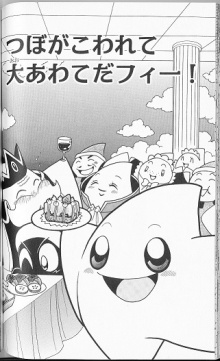 Big Panic, the Jar is Broken Fii! (Japanese: つぼがこわれて 大あわてだフィー!, Tsubo ga Kowarete Ooawateda Fī) is the seventh chapter of the second volume of the Densetsu no Starfy manga illustrated by Yumiko Sudō.

Starfy is holding the jar while a flashback of him capturing Ogura with it is seen. The people of Pufftop are celebrating the return of peace to their home. Starfy accidentally smashes the jar into a table. The jar breaks and Ogura gets out of it, but he happens to be asleep. Starfy takes this chance by putting him back in the jar and attempting to fix it with tape. The tape falls off and Ogura's tail appears out of the hole. Papa Star then offers Starfy some food. Starfy attempts to hide Ogura's tail while declining Papa Star's offer. Papa Star goes closer to Starfy. He finds it strange that Starfy didn't want any food, but then he notices Ogura's tail. Starfy puts Ogura's tail in his mouth to make it look like he's already eating. Papa Star falls for this and leaves. Starfy then spits the tail out. This causes the jar to fall out of Pufftop. Starfy panics believing the jar will break completely upon landing, but then it lands on a cloud. Starfy and Moe jump down to get the jar back, but someone has taken it. The person that took it introduces himself as Shuuri-jiisan. Shuuri-jiisan tells Starfy and Moe that he can fix the jar if they bring him an item from a dangerous part of the ocean. Shuuri-jiisan shows them a map of the area. Starfy and Moe panic at the sight of what they'll have to go through, but Starfy agrees to go. Moe says he'll stay and watch the jar, but Starfy drags Moe with him.

After going through the Ocean of Sharks, the Magma Reservoir, the Sea Urchin's Nest, the Sharp Tunnel, the Waterfall Climb, and the Sludge Pond, Starfy and Moe get what they need to fix the jar. Soon Starfy and Moe return to Shuuri-jiisan in really bad shape. Shuuri-jiisan tells them how to fix the jar, and Starfy does just that. The jar looks as good as new, but then Shuuri-jiisan reveals himself as Ogura. After the jar fell out of Pufftop, Ogura got out of the jar and left his tail behind so it would look like he's still in it.

Meanwhile, the other residents of Pufftop are still partying and Papa Star sees two shooting stars. Papa Star starts to make a wish, but the guards tell him that it's actually Starfy and Moe chasing Ogura.