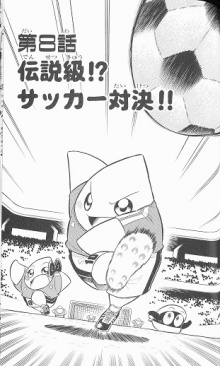 The chapter begins at the Amiy Stadium where the Pufftop Kingdom and the Amiy Kingdom are having a kickoff. The referee blows the whistle and Starfy kicks the ball to Starly but Starly kicks the ball to Prince Coral and Starfy falls over. Starfy quickly swaps her clothes to be part of the Amiy Football Club team, shocking Starfy and Moe who wonder why she suddenly changed sides, to which Starly replies she is a backer of Coral. Starly wishes Prince Coral good luck while he is dribbling the ball. Starfy calls Starly a traitor and dashes over to Coral trying to slide over to the ball but he misses, however. Starfy dashes over again and manages to use an extendable leg to kick the ball but Starfy finds it hard to balance and his extendable legs break off.

Starly kicks the ball of Starfy but the referee calls a foul. Starly tries to object by saying that Starfy fell on purpose. Starfy has control of the ball and has a free kick. He decides to pull off a banana shot and he kicks the ball flying towards the goal post. It misses, but then it flies all the way to the goal on the other side, causing an own goal, shocking Moe. The ball gets kicked back to Starfy. Starfy decides to use his Star Spin to head shot the ball but it gets lost. Starfy wonders where the ball is to which Moe replies it is stuck on his head. Starfy runs towards the goal with the ball on his head then Starfy manages to get it off.

Starly shouts at Starfy for touching the ball with his hand but Starfy says "in fact it's legs" and it is revealed that Starfy spinned the ball around while being upside down, which Starly finds confusing. Starly kicks the ball to Prince Coral. Coral runs up a wall, flips upside down and performs an overhead kick, scoring a goal. Starfy is sad to be losing and Starly taunts him but Starfy tries to run up a wall to perform an overhead kick himself but Starfy has to support himself with a rope. Starly breaks down the wall by kicking a football at it, leaving Starfy and Moe marked slightly.

Someone shoots the ball towards the goal so Starfy rushes towards it but unfortunately gets hit by the ball in the face and collapses. Starfy and Moe worry for Starfy and try to get his attention, with Moe saying "oi" and Starly asking whether Starfy is all right. Starfy replies his face was bashed and Moe, Starly and Coral look shocked to see Starfy with big teeth sticking out. Regardless of his injury, Starfy continues to dribble the ball. Moe decides to "retire".