From Starfy Wiki
(Redirected from Merchandise)
Jump to navigationJump to search 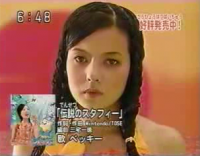 The Legendary Starfy series has lots of merchandise. Various merchandise have been released to promote the games, including both retail products and not for sale merchandise.

Additionally, mangaka have produced manga based on games in the The Legendary Starfy series and there have been a few products available in capsule machines for multiple Nintendo games including most games in the series.

There are also various publications like Famitsu and Nintendo Power that cover the series in certain volumes and may be considered Legendary Starfy merchandise.

This article lists officially licensed merchandise by Nintendo, promotional items and manga from mangaka. It will not list fan-made works. 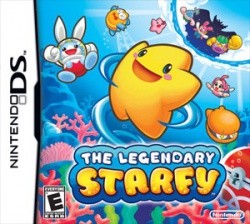 There are currently a total of five games in The Legendary Starfy series, the first three of which were released for the Game Boy Advance, and the last two have been released for the Nintendo DS. The games sold relatively well in Japan, contributing to the production of sequels. The fifth game, known as The Legendary Starfy (Densetsu no Starfy Taiketsu! Daīru Kaizokudan (Japanese: 伝説のスタフィー たいけつ！ダイール海賊団) was not advertised as a direct sequel, and much of the artwork was designed in a different way to make the characters look like plush dolls. The Legendary Starfy was the first game to be localised into English and sold outside of Japan in North America and Australasia. In the localisation process, there were various localisation changes, for example the manga-style cutscenes were changed to be read from left to right instead of right to left. 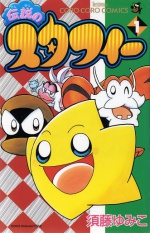 In addition to the two aforementioned manga series, a series of The Legendary Starfy manga illustrated by Sayori Abe predating the manga by Yumiko Sudō appeared in appeared in certain pages in issues of Shogakukan's Separate Grade Learning Magazines (Japanese: 小学館の学年別学習雑誌), from April 2002 up to December 2002 (inclusive) and was never released in tankōbon form. [1][2]

In 2008, at least two manga based on The Legendary Starfy were created and published in the magazine Character Parfait, starting from volume 8. [3] 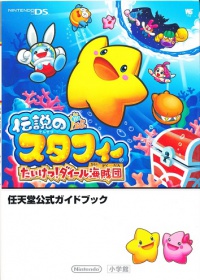 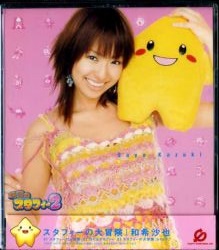 The front cover of the CD case of Starfy no Daibouken

The second CD, Starfy no Daibouken (Japanese: スタフィーの大冒険, literally Starfy's Great Adventure), was sold as a tie-in to promote Densetsu no Starfy 2, but was not advertised on the Densetsu no Starfy 2 official mini-site for reasons unclear. Both CDs include renditions of the series Title Song.

The packaging of the Starfy Swimming in the Sea edition

There are two types of special playing cards (Japanese: 伝説のスタフィー トランプ, Densetsu no Starfy Trumps) based on Densetsu no Starfy. The playing cards come in two versions - a blue edition called 'Starfy Swimming in the Sea' (Japanese: 海を泳ぐスタフィー) and a pink edition called 'Starfy Standing on the Beach' (Japanese: 浜辺でたたずむスタフィー). The cards are split into King, Queen, Jack, Joker, 2-10 and Ace. Each individual card is 58x89 mm. 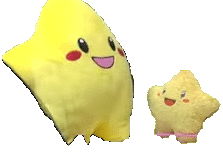 There are two Starfy stuffed toys, as well as a series of beanbag toys.

The first stuffed toy; the Big Starfy stuffed toy (Japanese: おっきなぬいぐるみスタフィー, Big stuffed toy Starfy) was produced by Tomy and is advertised on the goods section of the official Densetsu no Starfy mini-site as a cute stuffed toy that can also be used as a cushion.

The beanbag toys are known as the Mascot Beanbags (Japanese: お手玉マスコット). They include the blue bear Kigurumi, the Balloon, Starfy with the Magic Set, Starfy riding the Catfish Boat and Starfy on his own. These toys were advertised on page 271 of the Densetsu no Starfy 2 Nintendo Official Guidebooks published by Shogakukan.

Showa Note, a company with a focus on stationary, produced nine different kinds of Densetsu no Starfy merchandise that were all released on December 20, 2002. 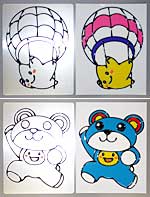 Fairy Tale Land (Japanese: メルヘンランド) is a series of products produced by Aiko for line drawings of mascots and promotional characters which can be colored in and then baked on a hot plate and added to tiles or glass windows.

One series of line drawings is based on Densetsu no Starfy and includes line drawings of Starfy with the Balloon and Starfy wearing the Kigurumi. 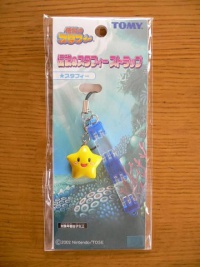 The Densetsu no Starfy strap

The Densetsu no Starfy strap (Japanese: 伝説のスタフィー ストラップ) is a figure of Starfy attached to a strap. It was produced by Tomy. 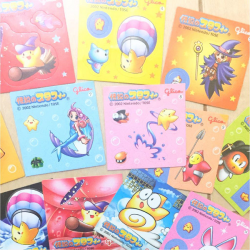 Various stickers from the Gummi Candy

Other Densetsu no Starfy stickers 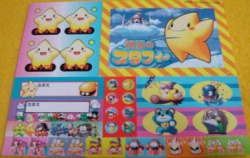 Stickers of various characters, including two stickers where people can write their name

In addition to the aforementioned Showa Note Densetsu no Starfy stickers and the Ezaki Glico stickers, there is another set of stickers based on Densetsu no Starfy. The company that produced them is unclear. It is possible that they are promotional not for sale stickers. They are not listed on the official Densetsu no Starfy mini-site's Goods section.

The stickers include the following characters and abilities: 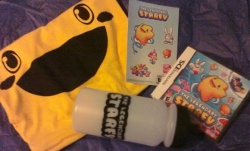 The review merchandise with a review copy of The Legendary Starfy

The video gaming blog Joystiq also ran a The Legendary Starfy "prize pack" competition from September 10th, 2009 until 3:00PM ET on September 16th, 2009 where commenters had a chance to win all three of the promotional items by telling Joystiq what their favorite item in the pack is. [8] 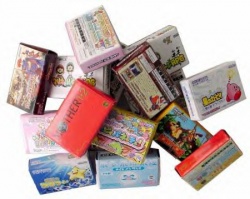 The now defunct online importer Lik-Sang also had these erasers for sale on their website. They would choose a random eraser much like how consumers would receive a random eraser from capsule machines.

See here for a list of Game Boy Advance erasers. 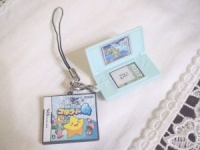 There have been multiple series of miniature Nintendo DS game cases based on Densetsu no Starfy 4, including Nintendo DS Game Card eraser, DS Mascot (and its successor DS Lite Mascot) and Nintendo DS Perfect Collection. All of them were presumably available from capsule machines in Japan. 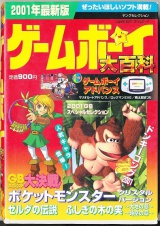 The 2001 edition of Game Boy Encyclopedia, with artwork of Starfy from when Densetsu no Starfy was in development for the Game Boy Color

The Legendary Starfy series has been mentioned in various publications, including but not limited to, the aforementioned manga sources, Famitsu, Enterbrain's Video Game Magazine, Japanese magazine Nintendo Dream, the now defunct North-American publication Nintendo Power, the 2001 edition of the Game Boy Encyclopedia, and the Nintendo Spaceworld Official Guidebooks.

Not for sale merchandise

This section lists The Legendary Starfy merchandise that were never meant to be sold.

According to Famitsu, to celebrate the release of the Densetsu no Starfy Trumps, a special campaign was launched in which 50 lucky people could win a star-shaped Starfy balloon. It is unclear whether this was an official promotion or an offer by Famitsu. [11]

Cutouts promoting Densetsu no Starfy 3 were made, featuring the box art and introducing Starly.

A flyer of Densetsu no Starfy was made and was presumably used to promote the game.

In Japan, there was an August 2004 Gekkan Nintendo Tentou Demo Disc with footage of Densetsu no Starfy 3.