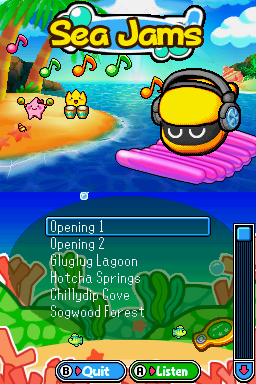 The Sea Jams menu as it appears in The Legendary Starfy

The Sea Jams feature has Easter eggs or secrets for each game in the series.

After defeating Ogura for the first time, this will unlock the world map screen, in which additional options including Picture Book, Treasures (Japanese: たからもの), Minigames (Japanese: ミニゲーム), Photograph (Japanese: しゃしん) and Extra (Japanese: おまけ) are available via the select button. Choosing 'Extra' will bring the player to a separate menu similar to Moe's Case and Moe's House, in which Starfy is seen swimming in a pool of water. Sea Jams is available as an unlockable option, but the player must first return to Deep Sea to find Wotsaruto and return his Tone of Ocean instrument for the second time. It will be found in the original scrolling area that Boerun and the Buranko had originally left it. This will then unlock the Sea Jams option in the Extra menu, with all of the soundtrack already available at once.

When a tune is played in the Sea Jams, Wotsaruto will play his Tone of Ocean instrument and musical notes will come out, with an occasional shocked Starfy. However, if the player selects the Tone of the Ocean? song, only shocked Starfys will appear from Wotsaruto's instrument.

The Sea Jams becomes available as an option in Moe's House after completion of the game, but no music is available at first. Individual tracks must be unlocked by clearing past Areas. Music which the player has yet to unlock appears as "????????".

The player can also receive the tune Staff Roll 2 as a gift after purchasing every item from Lovely's Shop.

Playing "Yanki Kigurumi" (page 3, second to last tune) causes Moe to apparently sing using the microphone. He looks like he is laughing and two jagged flashes of 'lightning' can be seen above him. Starfy meanwhile, starts running back and forth with a shocked expression. Stopping the tune puts Starfy and Moe back to normal.

Like Densetsu no Starfy 2, the Sea Jams is available in Moe's House after completion of the game, but no music is available at first. It can be loaded by selecting Wotsaruto with his/her head peering out of a hole, who does not appear in Moe's House before completing the game. Individual tracks must be unlocked by clearing past Areas, and purchasing them in Jojiro's Shop. Music which the player has yet to unlock appears as "????????".

The player can also receive Tone of Ocean Rock as a free gift from Jojiro after purchasing every item in the Shop.

Playing Boss Battle, Defeat Ogura, Jashin Evil, Minigame 2, Starfy Dance or Tone of Ocean Rock changes Starfy and Starly's guitars to more fancy ones that look a little like the Legendary Guitar. Starfy's is red, and Starly's is blue. Starfy, Starly, Wotsaruto and Moe also start to wear sunglasses. Moe starts to wear a black wig. Things turn back to normal when the tune is stopped.

After the player defeats Degil at least once, the Sea Jams option becomes accessible in Moe's House by tapping the radio on the touch screen. This brings the player to a menu known as the Legendary Concert (Japanese: でんせつの ☆コンサート☆), showing Mattel, Moe, Starfy and Starly in a band, where a total 56 tracks can be played from 12 pages of soundtrack. The soundtrack must be unlocked by purchasing them separately from Maniankou's Shop and locating them in blue treasure chests. Music that the player has yet to unlock will appear as "☆☆☆☆☆☆☆☆☆".

In The Legendary Starfy, the Sea Jams feature is found as an option in Moe's Case and will be unlocked after the player has defeated Mashtooth. Moe is seen wearing headphones on an inflatable beach pillow by the sea, while Starfy and Starly are relaxing on the beach. When a tune is played, normally Starfy will play the drums, and Starly will play with maracas. For unknown reasons, when Wireless Options or The Squirts' Drums is played, Moe is replaced with Herman and Starfy and Starly will play with guitars instead.

When a tune is playing, musical notes will appear. If the player uses the stylus to throw fish from the bottom screen on to the musical notes, the first part of the Title Song will play. This can be done three more times in succession to play extra parts of the song.

Unlike most games in the series, the player does not have to unlock the tunes in the Sea Jams separately. There are a total of 79 tunes.