Difference between revisions of "Densetsu no Starfy"

It is the first game in The Legendary Starfy series.

This game began as a Game Boy game. In November 1995, Nintendo producer Hitoshi Yamagami's boss instructed him to create some kind of 'floaty platformer'. Hitoshi Yamagami would later collaborate with TOSE producer Yasuhiro Minamimoto.[3] It originally went under development as a balloon-lifting game, until being reworked as a game where the player has to control a bubble with a Nintendo character in it[4] and later a floating character. Both a jellyfish and a starfish were initial considerations, and a starfish was eventually chosen for the game.

As the game was approaching its release for the Game Boy Color, it was again canceled and rebuilt for the Game Boy Advance which was only going to be released in 2001. Starfy was apparently going to be purely a starfish, until he was made to fall down from the sky, which supposedly invoked a community policy for TOSE to reply that Starfy is neither a star or a starfish when asked.

There are various differences between the Game Boy Color version and the final Game Boy Advance version still noticeable on Nintendo of Japan's page about the Nintendo Space World trial demo. For example, the official logo and some of the character artwork and names of characters were changed later in development, including Kyorosuke (Moe) who was originally known as "Kyororon". It should be noted however that the Nintendo Space World 2001 trial demo for the Game Boy Advance was promoted with the old logo used during the Game Boy Color period. There was also character artwork for the Game Boy Advance version from early in development, which although different (with the exception of Moe), were not final.

Densetsu no Starfy was re-released in Japan for the Wii U Virtual Console on July 29, 2015 for 702 yen (including tax).

Surrounded by the vast sea there is a kingdom high above the clouds called Pufftop. Living there is Starfy, the prince of Pufftop. Starfy is often careless and clumsy in nature. Times were normally peaceful in Pufftop, until Starfy was carrying around valuable treasure and he accidentally dropped a jar into the ocean. Just then, the being inside the jar used his magical powers to create a terrible storm. Tornadoes then struck the Pufftop Palace. Starfy struggled to hang on, and eventually dropped into the ocean showing his Done For pose. Starfy fell straight into Lobber's Cave, located on a small island.

Starfy finds Herman wearing an ordinary gray shell. He has lost his missing home; a conch shell called the Pretty Shell and Herman asks him to find it. After finding a Kettle, Herman, believing it may have been washed further, gives Starfy a key leading to another part of the level, where Starfy finds a tusk shell - the Dentalium Shell. After finding the tusk shell, Herman - who finds the shell too small - thinks that it is behind the rocks. He then teaches Starfy how to use the Star Spin attack. Later, Starfy finds the colorful conch shell and returns it to Herman. Herman is very grateful for Starfy and leads Starfy to the next stage, Coral Reef.

Herman asks Starfy to find his friend who is being chased by bad guys. One of the bad guys is seen swimming away, so Starfy follows him. Starfy advances to a room with two bad guys known as the Fork brothers. When Starfy finds them to be picking on a yellow clam, he defeats them with his Star Spin. The yellow clam is revealed to be Moe. He reveals that "his dearest" Ruby was kidnapped by a bad guy called Konk. It was then Fork and his brother chased after him. Starfy and Moe become good friends, and Moe joins Starfy on his quest back to Pufftop, offering advice. Later, after destroying the Dentalium Shell and the Kettle that were blocking the water from flowing, Starfy finds and defeats Konk. Ruby returns and Moe is much happy to see her again. Starfy and Moe advance to Stranded Whale.

Starfy and Moe decide to continue to help others on their way to Pufftop. Later in the quest, after Starfy and Moe clear the stage Sea of Ice, Starfy finds an unknown demonic eel who came from the jar that Starfy knocked down before he fell into Lobber's Cave. He plans to submerge Starfy and Moe in the Deep Sea, and believes that the "strange clam" is unimportant and that Starfy is an annoyance.

Later on their adventure, Starfy advances to the Undersea Ruins. An ammonite called Horun then tries to attack Starfy and Moe. It is revealed that Horun was attacked by a huge creature resembling Starfy created by the demonic eel called Doppel. Horun tried to confront Doppel, but was left injured. Once Horun realizes who Starfy really is, he helps him and Moe find Pufftop.

When Starfy reunites with Old Man Lobber, he asks if Starfy arrived safely and if he can look for Moe. Moe has been kidnapped by a sea otter known as Rarako. When Starfy finds Rarako, Rarako thanks him for his 'food' and gives Starfy what he was looking for — the Yogensho. Moe eventually escapes and Old Man Lobber finally gets to read the book. Moe is excited regarding the legends of the Yogensho, though it seems that he spoke too soon as the demonic eel appears to blow Starfy, Moe and Old Man Lobber away.

Starfy and Moe are taken away to the boss room with Doppel. The demonic eel brings Doppel to his full power and vanishes. After Starfy defeats Doppel, the demonic eel leaves behind the jar that Starfy dropped from Pufftop Palace and the Yogensho. Starfy, Moe and Old Man Lobber advance to the Sea of Sky that leads to Pufftop and Old Man Lobber begins to read the Yogensho. The Yogensho reveals that the demonic eel's name is Ogura. It prophesied correctly that a large storm never seen before would hit the sea and the demon Ogura would go on a rampage until a hero appears to hunt down Ogura's minions one after the other.

Ogura leaves three bosses for Starfy to battle before he advances to Pufftop. Starfy, Moe and Old Man Lobber's main objective now is to defeat Ogura and bring peace back to Pufftop.

The prince of a kingdom high above the sky resting on the clouds, known as Pufftop. After being knocked off Pufftop by a dangerous storm, he sets out on a quest to make it back with the help of some new friends.

A clam who can come across as rude or narcissistic at times, but is loyal to his friends and has good intentions at heart. Originally distant to Starfy, they soon become good friends. They first meet at the Coral Reef after being rescued by Starfy from bullies (Fork and Fork's brother). He has a crush on Ruby, a zebra turkeyfish.

A wise lobster who lives in a cave on a small island. He finds Starfy and helps him train to return to Pufftop. He is also a key figure in revealing the mystery of the demonic eel Ogura.

A demonic eel who was sealed inside of a mysterious jar. He is a mischievous and malevolent troublemaker, but his backstory and weakness is revealed in the sequels Densetsu no Starfy 2 and Densetsu no Starfy 3, showing that he is really a lonely soul who wants to be recognised and validated.

There are 44 tunes in this game (excluding a few jingles) and possibly one unused track that sounds like Opening Demo without the background percussion. These (except for the aforementioned track) become available in an option called the Sea Jams, that can be unlocked by returning Wotsaruto's Tone of Ocean instrument for the second time, after beating Ogura once.

Each character and enemy has their own comment that is read by Moe and an animated version of their sprite is shown. The Nintendo Official Guidebooks use different descriptions, however.

Some characters and enemies are rare and can only be encountered after beating the game for the first time. The challenge of completing the Picture Book was advertised as a selling point of Densetsu no Starfy prior to release on the Nintendo Space World 2001 official mini-site.

When the Picture Book is complete, the game shows a "Perfect!" (Japanese: パーフェクト!) screen with Starfy and Moe jumping up and down, Old Man Lobber, and fish coming out of the Picture Book every time the player chooses to load it. This screen is not included in the other games.

Follow the link above for a table of Picture Book data in Densetsu no Starfy.

Follow the link above for the Staff Credits of Densetsu no Starfy.

A Chinese version of this game was planned for iQue series as 斯塔非的传说 (Sitafei De Chuanshuo) (Chinese Nintendo console brand) but never released. It is officially referred to as "The Legend of Stafy" in staff credits. The ROM image of a release candidate of this localization along with Densetsu no Starfy 2 was leaked to the public in March 2019.[5][6] 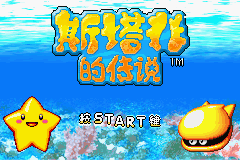 An additional localisation prototype also exists with its own font. Densetsu no Starfy appears to have been intended for an official English release, based on the account of an anonymous owner of a prototype, but cancelled. In the prototype version, Moe is known as "Kyoro" (shortened from his Japanese name Kyorosuke), and one of the conversations with him features profanity. The prototype came with 128M flash memory in a regular colored Game Pak but resembling a rumble pak. It is also marked with a red sticker with the writing Tose 四条分室 (Shijo Branch Office) No 062 (possibly Shijo Street in Kyoto; the city where Tose operates)

This coincides with an official account by Nintendo Treehouse but regarding a different game; the fifth and only localised official The Legendary Starfy game for Nintendo DS, though it is not known if Bihldorff misremembered the game for the original.[7]